“Thou shalt have no other gods before me”

When God gave this command to Moses, He was pretty straightforward. Of course, He went on to explain further, when in the next verse we hear about ‘no graven images or likenesses’. He had to, because we don’t get it. 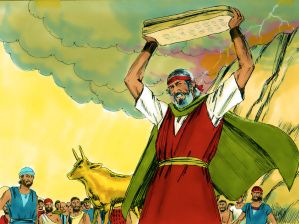 God knew that His people would screw this up, and yes, they managed. They did, and we still do. We create idols. I create idols.

When I was a teenager, I had my first experience where I recognized the theme of idolatry. It regarded the television. We lived out in the country, and cable was not available. Some people had satellite dishes, but most did not. An antenna, or “the aerial” as my grandfather called it, brought the local PBS and CBS stations in pretty clearly, and sometimes NBC came through as well.

A couple years after we started going to church, my mother announced that she had been convicted and that we would no longer have a television in our home. She gave the television to her grandfather. Mom perceived that the watching of television had become an idol, and she decided to do something about it, but I’m pretty sure that the idol of watching too much TV was replaced with the idol of making sure people knew why we didn’t have a TV.

Around the same time, we had a presenter come to our church to warn us against the satanic messages in Rock ‘n Roll music. We had a record burning. There is a photo somewhere of our youth group standing around the smoldering pile of vinyl. I stopped listening to said ‘evil’ music for a while, but I didn’t miraculously become a better Christian because of it.

In these actions, we aimed to separate ourselves from the world to prove to God that “we got this” and that He could count on us. “The world” was anyone who did not believe exactly what we did. Guess what? It was a farce. The holiness that we had to show the world became the newest idol. It was OK, though, because it was HOLY.

I was taught that it was my responsibility to make sure sinners knew they were going to hell. Since they were going to hate me anyway, I was taught that I might as well be blunt with them. Something was wrong, though…I just didn’t have the personality for it. I didn’t like confrontation; in fact, I feared it. I’ve never been in a fight, and to this day, I do not like to argue, negotiate, or do anything of the sort.

The responsibility of saving sinners by pointing out their sins was yet another idol. It was a goal. Kind of a badge of honor in the holiness world, but I couldn’t do it. I couldn’t do it because deep down, I knew I was a liar. I was as full of sin as I was the first day I went forward to the altar to confess my sins to Jesus.

My next idol was a three-decade long experiment in keeping God at arms’ length. I was pretty successful at worshiping this idol because I was always busy trying to find ways to make myself appear “good” while knowing deep down that I was “bad”. I knew I was a sinner, but I believed I had to atone for my sin. Be good, separate self from said world, point out their sin, hide yours, and you’ll make it. Can you say “idol”?

Focusing on idols comes naturally to us. I even let the good things in my life that are clear gifts from God become idols, which in turn cause me to embrace other ideas to make idols. A call to ministry became a way that I would escape from reality. Friendships became a way that I seek affirmation that I’m not a freak. Thinking I’m a freak is an idol that enables me to put up a wall between me and other people. I gradually move away from God. It’s a vicious, never-ending cycle.

I could go on and on, round and round. One thing I focus on becomes an idol, and then the way I try to break free of that idol becomes another. I’m sure I’m not alone…I’ve been told as much by many friends.

But does that stop me? Certainly not.

Idols are my specialty. They’re yours too. You might not believe it, but it’s true.

Fortunately, for you and for me, when we are in Christ, the Holy Spirit guides us away from idols.

When you sense Him leading you to stop and talk to that co-worker with a frown on their face, idols leave.

When He helps you remember that you have coins in your pocket as you pass the Salvation Army kettle, and you drop them in, idols leave.

When your kid’s teammate forgets their Gatorade, and you happen to have an extra, idols leave.

When you sit down to write your check for the offering plate on Sunday, and rather than figuring the exact percentage you’ve always been told to give, you just write a figure with a cheerful heart, idols leave.

When you run into an old friend who you know has fallen into many sinful habits, and instead of pointing those out, you sit down and catch up over a cup of coffee, idols leave.

Anything that comes between you and God is an idol, but until that moment when you leave this earth, or Christ returns, never be surprised when you find yourself looking at one instead of Him. But remember, Jesus paid the price once and for all. Rest in the knowledge that He’s not letting you go. He is the only thing to focus on that is NOT an idol.

Stop trying to rack up points with Him. Just love. That’s all He called you to do, and when you do, it will be hard to focus on idols.

The Musings of a Sinner and Saint

The Power of Story

This Sacrament is the Gospel

CHRIST IS THE TRUE PROMISE & GIFT

What the Hell is going on

Daily Thoughts and Meditations as we journey together with our Lord.

Who Is Jesus?
ihavebeensummonedbyname
Godinterest

Godinterest is dedicated to proclaiming Christ and set apart, to save and empower lives.