These last few days have been trying. The United States is a country divided. I have friends on both sides. Friends who are intelligent, caring, and thoughtful people.

Trump was elected and inaugurated. Some people love this and some people hate this. The day after his inauguration, many who are in disagreement stood together in protests and marches around the world.

Today, I saw this picture 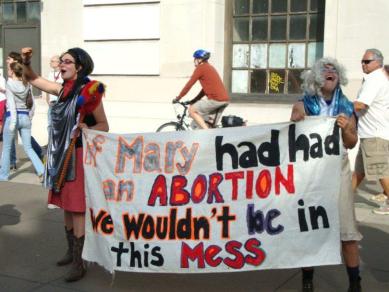 in a news feed. If you’re a Christian, you were likely offended by what their sign says. No surprise there. You believe Christ came to earth to save us, and these women are saying He shouldn’t have been born.

What I do know is that now is not the time to be sanctimonious. If you are a Christian, and you were angered or hurt by the sign, I understand completely. I was taken aback, but then I got to thinking…has anyone ever shared the Gospel with them? Told them what Christ did on the cross was for them?  Told them that fact without giving them the expectation that salvation was unattainable because of their current belief? Somehow, I doubt it.

I know a couple of women who have had abortions. You might too. I don’t have to live with their decision, but they do. They remember it. Perhaps they live it all over again every day. Perhaps they regret it, perhaps they don’t. None of that matters. What matters is that those of us who understand the Gospel should be caring for them regardless of their decision. They should feel comfortable in our presence despite their past.

But here’s the kicker…and this pissed me off when I was researching…the photo is several years old! Because we’re so quick to believe memes, someone apparently thought it would further a cause to dredge it up and tie it to Saturday’s marches.

Christians, let’s do the world a favor. When someone offends us, let’s love them. Let’s show them Jesus, not beat them down because they believe something different from us.

The Musings of a Sinner and Saint

The Power of Story

This Sacrament is the Gospel

CHRIST IS THE TRUE PROMISE & GIFT

What the Hell is going on

Daily Thoughts and Meditations as we journey together with our Lord.

The leading Christian magazine in the United Kingdom, helping you connect with God, Culture and Life